There was a problem with your log in form options. Please make sure things are set correctly and try again.
Back to Blog

The year is 1984. Preparation for one of the first PNSQC conferences is underway. Typed meeting minutes from the January board meeting report that "it was decided that late September would be a good time.

Preference was expressed for September 20th." Oregon was in the midst of its first tech boom in the mid eighties, helping contribute to a strong pool of quality professionals in the Portland vicinity. Employees from Intel, HP, and Boeing were in attendance at the planning meeting, as well as professionals from lesser known but notable Floating Point Systems and Metheus.

Meeting notes mention that one attendee would bring a “diskette” containing the conference mailing list. Conference information would be distributed to the list via snail mail, as well as shared with local companies and newspapers. Abstracts traveled similarly, mainly from coworkers via floppy disk, snail mail, or hand-delivery.

An early practice of the board was gathering attendee feedback after each annual conference. Please see the image below showing how different attendees learned about that year’s conference, and note the dominance of mailed brochures over methods such as email.

To further put in perspective the time period in which PNSQC came into being, here are some fun technology facts about 1984:

A couple of years later in 1986, more of the values and features remaining vital to PNSQC today emerged. The following is an excerpt from 1985 board meeting notes showing the evolution of both scholarships and workshops:

"In keeping with our non-profit status and the original intent of the committee to grow and provide technology for the future, the question of how to spend our money was addressed. Several suggestions such as scholarships, workshops, etc. were brought up and it was decided that this matter would be covered in our February meeting."

The very next year, in 1986, the team followed through on plans and the first workshops occurred. See an early communication below from the board to one of the initial presenters, who prepared a workshop on software complexity metrics. This was also the first year that the conference asked speakers to sign an agreement regarding their topic. 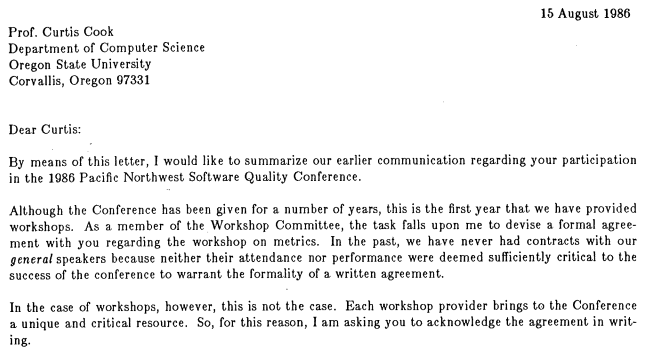 After the first year of workshops, the board reviewed attendee questionnaire feedback and reflected on the experiment. Meeting notes read:


“The workshops went better than expected and were sold out very early. The evaluations had not been summarized, but the add on question, as to whether they would be interested in attending another workshop if the same ones were repeated mid-year, showed much interest. There seemed to be very few negative comments.”

We hope you have enjoyed this glimpse into PNSQC’s inner workings and evolution over the last 40 years. Want to be part of our legacy and evolution? Registration has just opened! Also, there’s still time to get involved as a volunteer or submit a poster paper for this year.